A  new collaborative publication by members of the ...
END_OF_DOCUMENT_TOKEN_TO_BE_REPLACED

A two new collaborative publication by members of ...
END_OF_DOCUMENT_TOKEN_TO_BE_REPLACED

Information about a multinational project carried out under Arbre-Mobieu Action, ...
END_OF_DOCUMENT_TOKEN_TO_BE_REPLACED

The Association of Resources for Biophysical Research in Europe (ARBRE-MOBIEU) and the Production and Purification Partnership in Europe (P4EU) have produced a joint initiative on recombinant protein quality. We aim to develop a minimal reporting standard/best practice for the quality control of recombinant proteins to ensure that the input material used in biological, biophysical and biochemical research is of high quality. This condition, in turn, will result in more reliable and reproducible final data. The prescribed tests must be simple to perform using standard laboratory equipment, while still producing data acceptable as admission criteria for biophysical or structural biology labs.

(i)   Minimal information to provide in publications

The aim is to provide sufficient information on the protein identity, expression and purification parameters such that the experiment can be replicated reliably in any laboratory.

The resulting 4227 b.p. PCR product was DpnI treated to remove the template and purified using Ampure (Beckman Coulter) before In-Fusion (Clontech)  into NcoI-PmeI –cut pOPINE (Addgene plasmid 26043). The resulting plasmid will express eSpCas9 with an N-terminal NLS and a C-terminal NLS-His-tag). The plasmid was fully sequenced before E. coli Rosetta(DE3) pLysS cells were transformed with it, and transformants were selected on LB agar plates supplemented with 1% glucose,  Carbenicillin (50µg/ml) and Chloramphenicol (35µg/ml). A starter culture was grown overnight at 37°C with shaking at 250rpm in LB supplemented with 1% glucose, Carbenicillin (50µg/ml) and Chloramphenicol (35µg/ml). The culture was then diluted 1:50 in TB Overnight Express media auto-induction media (Merck ), grown for a further 3 hours at 37°C until the OD600 reached approximately 0.5, the temperature was then reduced to 25°C and the culture maintained for a further 24 hours. Cells were collected by centrifugation at 5000g for 10 minutes and the pellets (15 g/L) stored at -80°C before processing.

eSpCas9 was then concentrated to a maximum of 3mg/ml using a ultrafiltration device with a 30kDa MW cut-off, concentration was assayed using a Nanodrop instrument (Thermo Scientific) and a calculated A280 of 0.69 A280nm/mg/ml). eSpCas9 fraction was then separated into single-use aliquots that were flash-frozen in liquid nitrogen and stored at -80°C until further use.

If SDS-PAGE is the sole method of assessment of sample purity then ideally no other band other than the expected one for your protein of interest should be detected, as illustrated in the example figure. The staining should be chosen according to the amount loaded on the gel in order to be able to detect contaminants of 1% or less of the total protein load. N.B.: the detection limit of Coomassie blue staining is approximately 100ng per band, for reverse zinc staining approximately 10ng per band, while fluorescent or silver stains have a detection limit of approximately 1ng of protein per band. In other words, if you load 10µL of a solution at 1mg/ml, you will load in total 10µg of protein meaning. In order to detect contaminants you will need sensitivity lower than 100ng per band and you should therefore use reverse zinc, fluorescent or silver stain to be able to assess contamination. It is also possible to perform TCA or DOC/TCA or acetone precipitation to concentrate ten or more times the sample.

Common staining protocols can be found in:

More detail about other techniques can be found in: 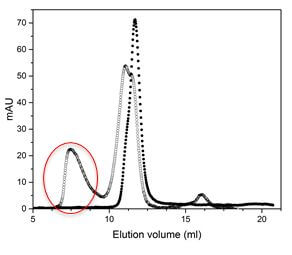 If you are using analytical size exclusion chromatography to assess homogeneity, only regular peaks corresponding to the prevalent monomeric or oligomeric species specific for that protein should be detected, and no aggregates should be detected in the void volume of the column situated in a position corresponding to 1/3 of the total volume of the size exclusion column used (e.g. for column with a total volume of 21ml the void volume is situated at an elution volume of 7ml). The figure below shows a good sample (filled dots) with a single, well-defined, symmetric peak, representing a homogeneous species, and a heterogeneous sample containing aggregates (open dots), note the ‘aggregate’ peak at the void volume of the column (circled) and the asymmetric main peak. SEC can, of course, also be used preparatively at larger scales to select specific oligomeric states e.g. if a dimer is functional in an experiment or assay but a monomer is not the peak corresponding to the size of the dimer may be selected. Please note that after pooling a specifically ‘sized’ peak any further processes e.g. concentration or buffer exchange may alter the oligomeric state. Pooled fractions from a single peak should be preferentially checked again by a further SEC round.

More detail about Size exclusion Chromatography can be found in:

If DLS is used to assess the homogeneity of your sample ideally only one species with a low polydispersity (with less than 20% dispersity of the peak) should be detected, and no aggregates should be detectable (as greater than 1-2 percent of your sample). The figure below shows a good sample (Left Figure) with a single peak and a heterogeneous sample containing aggregates (Right Figure).

One should remember that the signal is dependent on the size of the detected particle. For example in the right figure the aggregate of 150nm (right circle) represents more than 5% of signal, however less than 1% in weight, it is therefore negligible. On the contrary, the aggregates with an approximate size of 15nm (central peak) represent nearly 90% of the intensity signal but only 31% of the sample weight. This sample can clearly be defined as non-homogeneous.

More detail about DLS can be found in: 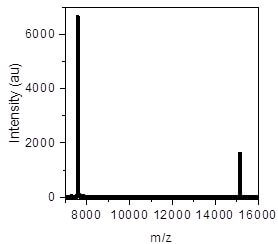 For confirmation of sample identity mass spectrometry is a technique that is now widely available, both in academic institutions and commercially. Mass spectrometry will identify species according to their mass over charge ratio. In the intact mass (also known as ‘top-down’ MS) example presented here (see figure), the purified protein has an expected mass of 15154.8 Da. Two peaks can be detected: one with a double charge and a ratio of 7578.34 m/z and one with a single charge and a ratio of 15155.56 m/z. Since these two peaks are in good agreement with the expected molecular mass, the produced protein is the expected one and no trace of degradation or contamination can be detected.

You may also use ‘bottom-up’ mass spectrometry (e.g. tryptic digest/MS) to confirm the identity of our protein. This method will also detect (and identify) any contaminating proteins but will not provide information on the integrity of your protein. It can be conveniently performed on samples excised from SDS-PAGE gels.

More detail about mass spectrometry can be found in:

Depending on the intended use and in addition to the methods listed above, the following methods may also be applicable and are highly recommended, although they are not considered to be as essential as those in section (ii)

The first of these tests can be performed simultaneously when determining protein concentration spectrophotometrically (using A280nm) as most instruments will also allow you to collect data over a wide spectrum of wavelengths. This additional data can be very informative. 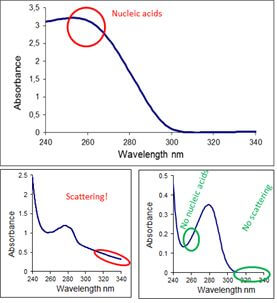 More detail about UV spectrometry can be found in: 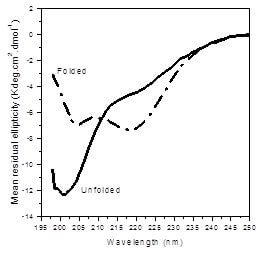 Circular dichroism (CD) looks at the difference of absorption of left and right handed light. In the figure, typical curves of both an unfolded protein (plain line) and of a folded protein (dotted line) are presented.

More detail about CD can be found in:

Nuclear magnetic resonance (NMR) spectroscopy is a spectroscopic method to study magnetically active nuclei in an external magnetic field. Measuring a one dimensional (1D) 1H NMR spectrum of a protein requires only little material, is pretty fast and the spectrum clearly indicates if a protein is folded or not. In the 1D 1H spectrum of a well-folded protein (top) the peaks are narrow and sharp and distributed over a large range of chemical shifts (good signal dispersion); signals can be especially found at ppm values  < 0.5 (corresponding to high field-shifted methyl group protons) or > 8.5 (corresponding to down field-shifted amide protons) are observable. In contrast, the peaks are broader and not as widely dispersed in the spectrum of an unfolded or partially folded protein (bottom). 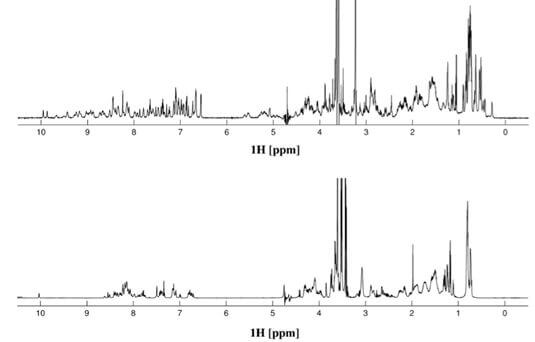 More details about NMR spectroscopy can be found in:

This DLS conformation that allows processing a large number of samples in plate format, has simplified buffer condition screening. Buffer matrices for multi-parametric screening of pH, salinity, buffer nature, additives and co-factors can be generated by hand or using simple robotics. One approach is to dilute samples in the different buffer, classically ten times with a final concentration of 1 mg/ml for a 10 kDa protein or 0.1 mg/ml for a 100 kDa protein. The homogeneity of the sample and the presence of aggregates can be assessed for each condition, and the optimal buffer composition can be selected, according to solubility parameters and the downstream application.

More detail about this approach can be found in:

Modern Thermofluor and differential scanning fluorimeter that allow processing a large number of samples are methods for screening buffer conditions. Similarly to automated DLS, buffer matrices can be generated.

In a thermal shift assay, protein unfolding is monitored by heating up the samples in a linear temperature gradient in the presence of an environmentally sensitive dye. One of the most commonly used dyes is SYPRO orange, which fluoresces upon interaction with hydrophobic parts of the protein. As the temperature increases, the protein starts to unfold and exposes its hydrophobic core. The dye interacts with these exposed hydrophobic areas and the fluorescence increases. Ideally, the samples will display a sharp increase in fluorescence over a short temperature interval. The inflection point of this sigmoidal curve then represents the protein melting temperature Tm, at which 50% of the protein is unfolded. Most thermal shift assays are performed by using 96-well plates containing various buffer conditions in a real-time PCR machine. Comparing the Tm´s between all these different conditions provides hints to optimize the buffer conditions for protein purification and storage.

More detail about this approach can be found in:

Analytical and Nanoanalytical Methods for Biomedical and Environmental Sciences

Dear Colleagues, It is our privilege and pleasure to ...
END_OF_DOCUMENT_TOKEN_TO_BE_REPLACED