The MOBIEU cost action ended in April 2020. WG5, Transnational access to instrumentation and expertise, was responsible for four of the main deliverables for MOBIEU. These are detailed below.

Two on-line surveys were initiated in June and July 2016 (early in the lifespan of MOBIEU), to identify laboratories which already have transnational access (TNA) and those who would like to provide access under MOBIEU. The first survey (WG5 resource and transnational enquiry) was made among WG5 members only, to ensure that the right questions were being asked. A new and TNA focused survey (TNA in your lab) was then set-up and distributed to all MOBIEU management committee MC members of MOBIEU.

The full report may be found in WG5 Task1&2 Report

In short, 87% of the laboratories already provided transnational access (TNA) in some form, and 85% of the labs were willing to provide TNA in some way under MOBIEU. This positive result of the survey showed that MOBIEU members had the capabilities and motivation to encourage TNA, and was an important building stone for WG5’s work.

Relevant information from teams already experienced with providing some sort of TNA was also collected in the survey. The most abundant conditions for TNA found, each applying to about 2/3rds of the labs, were “With Payment”, “Under Formal Collaboration” and “Under Informal Collaboration”. More information about the results from the survey may be found in the report linked above. Although the limited budget for MOBIEU did not allow for direct payment to labs for offering TNA, the two latter conditions were encouraging for setting up a system for TNA access under MOBIEU. Thus, the solution for a mechanism to promote TNA was based on collaboration, and aiding direct contact between laboratories.

The mechanism implemented for TNA under the scope of MOBIEU, was based on two strengths of the COST action:

New ARBRE-MOBIEU members were encouraged to register their lab and instruments on the website, and in doing so they could also indicate directly if they were willing to participate in MOBIEU mediated TNA. A dedicated database for TNA was built and populated by laboratories willing to participate. Additionally, the WG5 group recognized that the large selection of available instruments within ARBRE-MOBIEU was a significant asset for fostering expertise. Therefore, the focus for TNA under MOBIEU was based on expertise and this was reflected in the TNA database. The database now contains information about 42 European laboratories, and is directly searchable by members via the ARBRE-MOBIEU website:

Where the pairing of TNA hosts and visitors could be effectively made via the TNA search, the STSM scheme was the basis for financial support for the visit.

From a total of 50 STSMs, a significant majority of all the missions were trans-national access. The figure below shows the distribution between hosts and applicants based on their country of origin; a clear trend of movement from a set of counties (including many ITCs) to another set is seen. Overall, the TNA scheme is a clear success for MOBIEU.

The success of the COST action supported STSM’s with a clear trans-national access component makes it clear that post COST action TNA is highly desirable for the biophysical society embraced by MOBIEU. A new INFRAIA starting community infrastructure, MOSBRI, is under development as a response to the H2020 call INFRAIA H2020-02-2020 with an application deadline of 14th May 2020. The building of the consortium and the application is supported via an ANR-MRSEI grant to the coordinating institution, Institut Pasteur. This INFRAIA will open up 13 biophysical facilities which all work “between the atom and cell” across Europe. The consortium have a wide geographic spread across Europe (see figure below). The outcome of the evaluation is expected about 5 months after the application deadline. 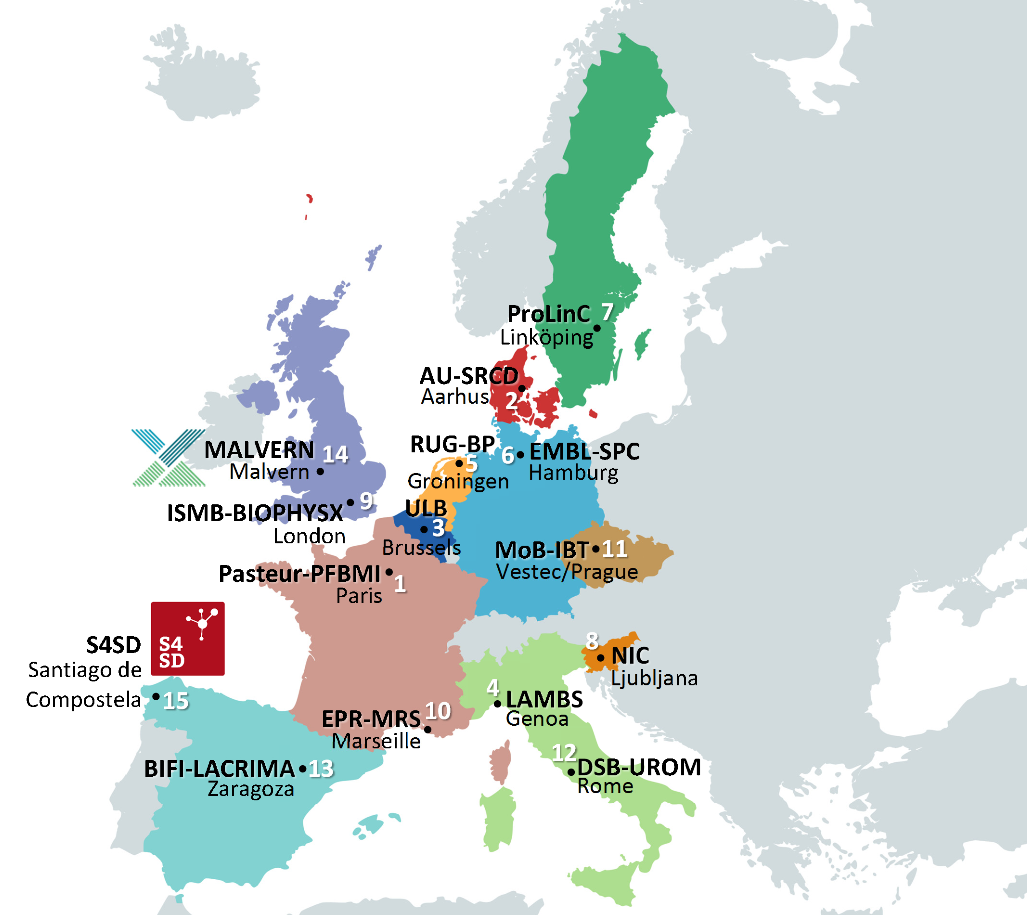